Increasing Inequalities in Access to Forests and Forest Benefits in Mexico

The success of community level forest management in Mexico has been widely reported (Klooster and Masera 2000; Bray et al. 2005; Ellis and Porter-Bolland 2008) and annual deforestation rates have been falling steadily (INECC 2015). However, while forest products and benefits of various types (e.g. timber, building poles, fuelwood, NTPFs, grazing areas) remain important for rural livelihoods, there is evidence that access to these resources is increasingly conditioned by socio-economic status, both within communities and among smallholders.

To examine these trends in community forest management, we draw on our recent experience as participants in the workshop, "Acceso Equitativo y Gestión de Bienes Comunes Naturales en México," organized by Dr. Leticia Merino on behalf of Oxfam Mexico in August 2017. The views here expressed are those of the authors and do not necessarily reflect those of the workshop organizers. We highlight two main issues: first, within communities there is an increasing concentration of rights to forest resources in the hands of more privileged families; and second, policies that are intended to maintain sustainability actually make it difficult for communities and small landowners to profit legally from forest management.

Between 55-65 percent of Mexico's forests fall within the territorial boundaries of ejidos and comunidades indigenas (CIs) (Madrid et al. 2009). Land is allocated to members for cultivation or grazing and the remainder (usually forest) is managed communally and cannot be divided, according to the agrarian law of 1992. However, not all people living within these territories, particularly in the ejidos, have equal rights to forest resources. The Procuraduría Agraria estimated that about one-third of families (the so-called posesionarios and avecindados) in ejidos do not have full ejidal land rights (Robles Berlanga 2000). They cannot vote in the Asamblea (communal meetings) and are excluded from profits made from commonly held resources (timber extraction or payments for environmental services, PES). The marginalized are either newcomers or descendants who did not inherit the ejidal rights, which under the agrarian law are limited in number and, in the case of ejidos, accrue to a single heir.

Landless families are less common in CIs than in ejidos, since rules regarding inheritance and circumscribed membership do not necessarily apply. On average, they have more territory per inhabitant than ejidos, so younger sons may be allocated new plots from the communally held areas. However, women in CIs are usually even more excluded from inheritance structures than they are in ejidos, as CIs tend to reflect more traditional internal social relations, with men dominating the means of production.

Despite the 1992 law, in many ejidos the commonly held forests have been informally divided between individual ejidatarios. Over the last 30 years there has been an increase in formal and informal sales of land and voting rights, resulting in the accumulation of land, including shares of the forest, by wealthier ejidatarios. Non-ejidatarios may be permitted to gather firewood or graze a few cows in the common forest, provided it has not been fenced into individual plots. In addition, buyers from outside are taking the opportunity to clear forests to invest in high value agro-industrial monocultures, often with indirect support from government programs, e.g. for avocados (subsidized by the Mexican Department of Agriculture to help the produce meet international phytosanitary standards) and palm oil (subsidized by the Fondo de Capitalización e Inversión del Sector Rural to construct processing plants).

Property statistics are not available for the forest areas outside ejidos and CIs, although it is estimated that 30-40 percent is owned by small and relatively poor land owners with only 50-100 ha of forest each, which can be too little to qualify for support from government programs. These small "unmanaged" forests are often used for timber, charcoal, and firewood and as a result the owners are vulnerable to fines and confiscation of products and tools. In places like the Yucatán Peninsula, some forest areas are owned by absentee landlords and these often function as open access zones for firewood, charcoal production, and cattle grazing for residents in neighboring ejidos and villages.

We contend that well-meaning regulation drives disorganized exploitation with uncontrolled profits to powerful middlemen, while forest policies privilege conservation and reforestation over sustainable timber management. In Mexico, timber and charcoal are heavily regulated products. Exploitation of timber requires an approved management plan (DOF 2008), which requires professional skills seldom present in rural populations or among owners of small, private forests. Government community forest funds include financial support for hiring registered technicians to prepare management plans, but not all communities are able to develop and implement coherent strategies. As a result, in many communities, logs are removed illegally. This inevitably benefits the wealthy, including their professional advisers, and exacerbates criminal activity as ordinary farmers and members of the community lose a potential source of income. The de facto privatization of the ejidal forests also means that many ejidos may no longer be eligible for community level support for forest management.

Community forest enterprises also face overregulation, including fines, delays, and rejections in the management plan approval process. In many cases these bureaucratic processes, which are intended to ensure sustainability, cause a loss of social capital, infrastructure development, and even the bankruptcy of the enterprise. The overregulation of the environmental sector contrasts with the Mexican government's tolerance and encouragement of large scale agro-industrial development. Compared to strict rules imposed on community forest managers, however, timber commercialization is lightly controlled, a situation that exacerbates the unfair competition between sustainable community forest management and illegal extraction of timber.

Charcoal production and sale typically requires a permit. Very few communities are able to acquire one because of the considerable paperwork involved. Many small farmers practice shifting agriculture (a.k.a. slash-and-burn), using the cleared stems to make charcoal. There is potential for sustainable charcoal production in many areas but individual producers are typically forced to sell to exploitative middlemen because of the difficulty of obtaining permits and because of police harassment.

The Comisión Nacional Forestal (the National Forest Commission, CONAFOR) has initiated a number of programs to support sustainable timber management at the community level, such as PROCYMAF (2003-2011), Silvicultura Comunitaria (2012-2016), and ENAIPROS (2013-2016), but funding for these programs has decreased in recent years in favor of PES and reforestation (CCMSS 2016). Most of the direct subsidies for reforestation go to private property owners. While some funding flows to ejidos and CIs, by and large these subsidies are for ecological restoration and the trees are not intended for harvesting, a fact that land owners often misunderstand. Sustainable management of natural forests, especially when followed by the development of local wood processing activities, could potentially bring more income. However, extraction rates are usually well below those permitted in the management plans, at least in tropical forest areas, as a result of insufficient capitalization and management capacity. This is both cause and effect of a situation in which the national timber market is poorly developed, with few well-organized buyers.

A further problem is that under the Mining Law, mining as a "public interest issue" takes precedence over community land rights. Concessions to private contractors (servidumbres) are issued for 99 years and if the community is not able to reach an agreement with the company within 60 days, the servidumbre is simply imposed, which may curtail any possibility of community forest management. 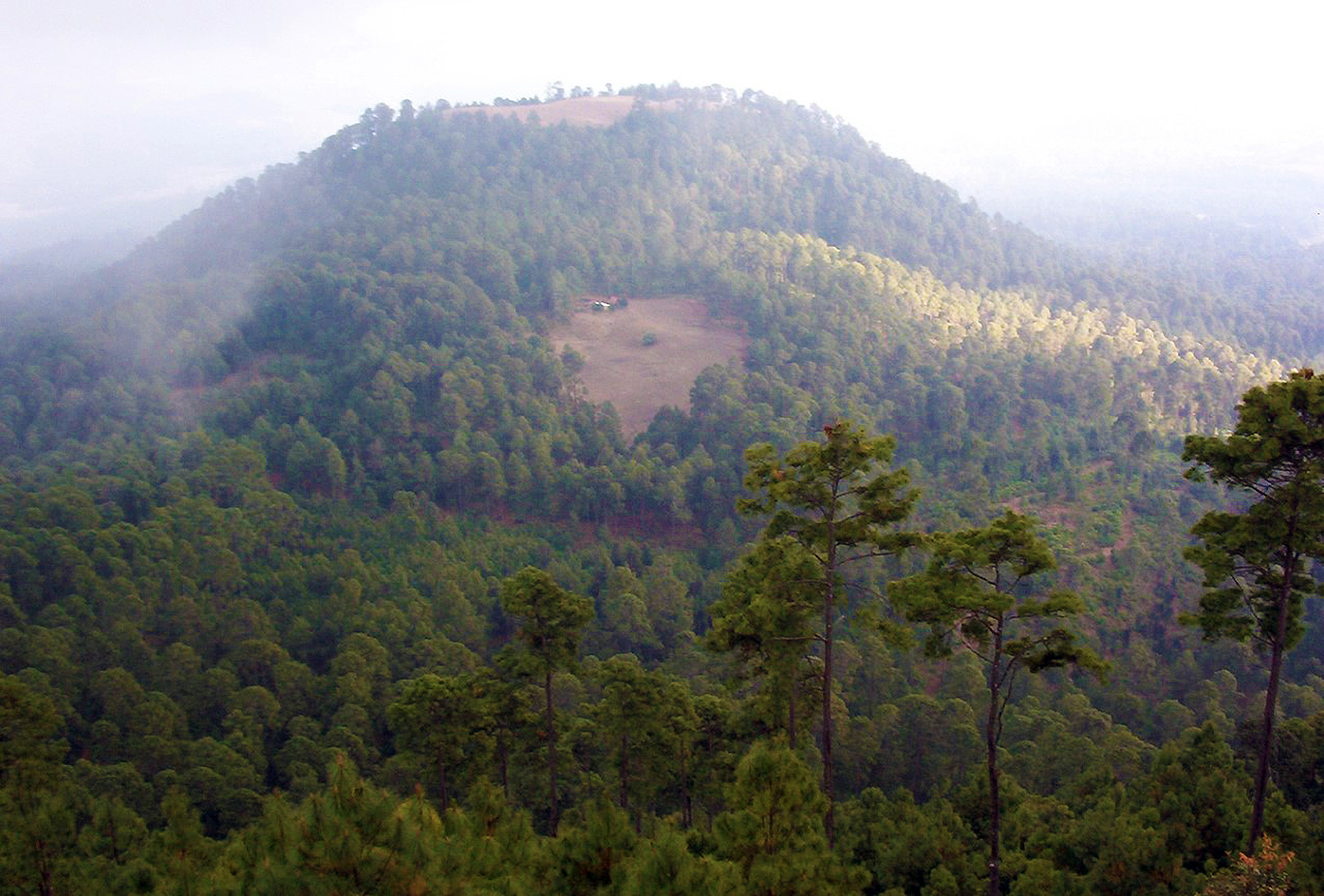 Figure 1. Nuevo San Juan Parangaricutiro in the state of Michoacán is a much cited example of successful community forest management with a thriving timber industry. Reforestation is visible on the lower slopes. Photo credit: Marcela Olguín.

We observe that important changes are happening under the radar in rural communities of Mexico. Most notably, inequality of access to basic forest goods and services within communities is growing rapidly. Further, despite some well-known successes in development of community forest enterprises, such as those of Nuevo San Juan in Michoacán (Fig. 1) and several CIs in Oaxaca, rural communities face major hurdles in establishing profitable and sustainable forest management, not only for timber but also in the management of other products. As new opportunities for forest management and conservation such as REDD+ arise, both the impediments to successful community forestry and social justice issues within communities need to be acknowledged and more openly discussed.

JLAG's Ten Most Popular Articles by Requests in 12/2022

JLAG's Ten Most Popular Articles by Requests in 2022