The recent social upheaval and political turbulence in Nicaragua are widely reported as the citizenry’s response to the Ortega administration’s new policy prescriptions. To date, hundreds of Nicaraguans have fallen victim to alleged extrajudicial killings by pro-government supporters and military police, while nearly 23,000 continue to seek asylum in Costa Rica (Al Jazeera 2018). Initial reports emphasized that protests arose in response to the government’s proposal to dampen pension benefits while raising social security taxes (Rogers 2018; Thaler and Mosinger 2018; Toro and Bosworth 2018).

Stories have surfaced from Nicaragua’s capital, Managua, where protestors have been tearing down a symbol of national unity – the tree of life – that was designed by the current vice president and first lady, Rosario Murillo. These árboles de la vida, many of which still dot the cityscape, embody a multifaceted symbolism that ranges from a simple art project meant to enhance Managua’s colorful urban aesthetic to a representation of Nicaragua’s literal and figurative roots in the ‘land of lakes and volcanoes,’ the country’s touristic and nationalistic motto. However, Nicaraguans are tearing down these trees as symbols of a corrupt regime that is detached from the social realities of its pueblo and tierra.

The smaller demonstrations over the Indio-Maiz Biological Reserve that preceded the widespread and violent protests underscore these relationships. From April 3 to April 16, 2018, a wildfire consumed 5,500 hectares of forests in Nicaragua’s Indio-Maíz Biological Reserve. To raise public awareness, environmentalists turned to social media, inspiring the creation of #SOSIndioMaíz on Twitter that fomented passive civilian and student protests from April 10 to 13 (Pilz 2018). Protestors perceived the government’s response to be slow, inadequate, and even counterproductive as officials waited weeks to send firefighting crews to the reserve and reportedly refused firefighting aid from Costa Rica (Agren 2018). The fire was extinguished within days after the initial protests. Yet, these embers remained on the streets and social media, as online and on-the-ground advocates drew parallels between perceived government neglect of its land in Indio-Maíz and neglect of its people via social security reforms. The co-occurring calls to action with overlapping SOS hashtags on social media tied to threats from the wildfire (#SOSIndioMaíz), to social security (#SOSINSS), and democracy in Nicaragua (#SOSNicaragua) show part of this relationship.

The current protests now appear largely disconnected from the Indio-Maíz fires. However, the failure to protect land that is at the heart of Nicaragua’s national imaginary, compounded by heavy-handed governmental responses to protestors, opened political opportunities that precipitated the escalating crisis – all of which highlight the importance of land as a stage for enacting and protecting national identity. In this light, we hope to provide further insight and provoke discussion about a current gap in media coverage: how Nicaragua’s revolutionary environmental history and the Indio-Maíz wildfire relate to the 2018 protests and how they may have opened political space for citizens to voice discontent with the current government and its policies.

Historically, land conflict has been at the heart of revolutionary movements in Nicaragua. The US-supported Somoza regime (1937-1979) supported policies that favored export commodities, continuing the latifundia system that had been integral to Spanish settler colonialism. By the start of Nicaragua’s 1979 revolution, 1 percent of the population owned 50 percent of the land (Faber 1999). Inequality in land distribution ensured poverty and environmental degradation, prompting social unrest. Despite bountiful harvests, land-poor peasant farmers (campesinos) and workers struggled to subsist on the low wages of the export industry and faced hunger and malnutrition. As large landholders continued to purchase and consolidate prime agricultural properties, many campesinos colonized marginal agricultural land for subsistence crops from hillslopes and forests. Intense cultivation in fragile environments caused land degradation and compounded problems of land tenure and subsistence. It was in this context that debates over land use and distribution became a major platform of Nicaragua’s current president, José Daniel Ortega Saavedra, who announced an Agrarian Reform law in 1981 that aimed to redistribute arable land to a third of the Nicaraguan campesinado. 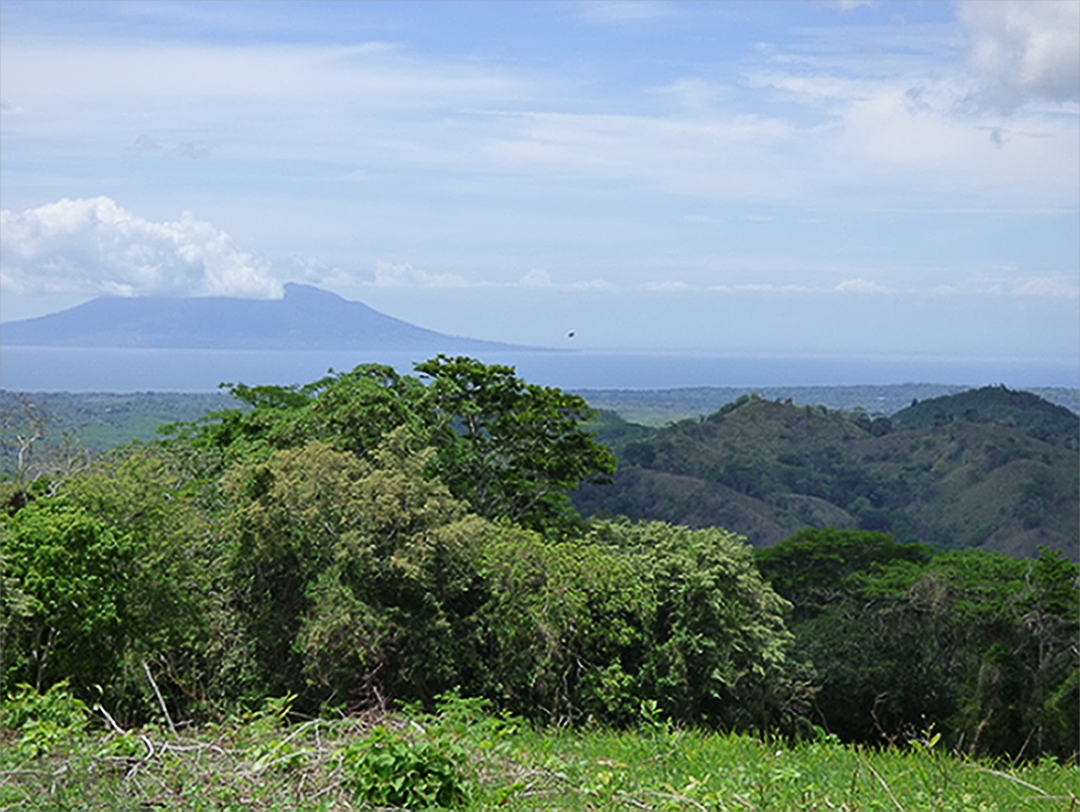 A landscape of lakes and volcanoes: Ometepe Island, located in Lake Cocibolca in southwestern Nicaragua. (photo by Petriello).

Ortega’s efforts towards land redistribution arose from the ideas of ‘revolutionary ecology’ – one of Latin America’s first environmental ideologies aimed towards acknowledging and addressing  the social, political, and ecological causes of environmental degradation. The impetus for this movement grew from similar concerns about the welfare and autonomy of Nicaragua’s campesinos who had been systematically displaced and disenfranchised by the Somoza dictatorship. The revolutionary government attempted to simultaneously address four pillars of environmentalism – 1) social and environmental justice, 2) national sovereignty and self-determination, 3) sustainable development, and 4) ecological democracy (Faber 1999).  This has been read as, “an attempt to reorient society, the economy, and the ecology along more equitable lines after the Somoza dictatorship had dominated Nicaragua’s financial, social and ecological capital for the benefit of the minority” (Sinreich and Couples 2014: 67).  In short, Nicaragua’s Sandinista revolution was accompanied by an environmental ideology that merged revolutionary struggles with environmentalism to address unequal access to land and land degradation, promote ‘sustainable’ land use and development, and reverse social inequality.

This platform emboldened the Ortega administration to pursue environmental measures that included environmental policy reforms, to create and expand protected areas and natural reserves, to create the Nicaraguan Ministry of the Environment and Natural Resources (MARENA), and to establish the government’s constitutional obligation to maintain all Nicaraguans’ rights to a ‘healthy environment’ (Wieberdink and van Ketel 1988). This ethos was modified and carried forward by future presidents Violeta Chamorro, Arnoldo Alemán, and Enrique Bolaños through additional increases in protected lands, the establishment of new land designations, and major overhauls to Nicaragua’s environmental institutions.

At the center of these reforms, and opposition to them, were appeals to national identity, heritage, and revolutionary reform. The interoceanic canal project, for instance, has been presented as a ‘sustainable’ nation-building project to complete the second stage of the revolution (CTGC 2006). Yet a former leader of the FSLN has rebuked it as anti-revolutionary and ‘contra-agrarian’ because “it will re-concentrate land in the hands of the few” (Lakhani 2014). Thus in the context of Nicaragua’s history, even ‘revolutionary’ Sandinista projects must pass a social litmus test reaffirming their commitment to healthy lands and healthy people.

The creation and maintenance of national parks fit particularly well within the revolutionary ecology movement. Nicaragua endorsed the idea of tropical forests as “natural patrimony for future generations” that justified establishing new protected areas (Nygren 2000: 810).  The Sandinista government designated Indio-Maíz Biological Reserve on April 17, 1990 – almost exactly 28 years prior to the start of the current protests – as part of this movement to maintain natural patrimony, direct settlement patterns, and “contribute to a socially just and environmentally healthy model” (Decreto Presidencial 527).  Presently, it is one of the largest protected areas in Nicaragua and is internationally recognized for its rich biodiversity. Indio-Maíz has also become a symbol of national and regional identity, representing a governmental promise to maintain national and natural resources for the benefit of all Nicaraguans and Central Americans.

Former president Arnoldo Alemán called the Ortega government’s failure to respond to the fires in Indio-Maíz “a neglect on the part of the central government, in not having a precaution [for] what is considered the lung of Nicaragua and Central America" (Trillions Business Network 2018). Similarly, the proposed pension reform was considered an assault on Nicaragua’s elderly. Videos and images of burning forests followed by those of bloodied elders and dead youth represented an assault on the past, present, and future of Nicaragua. In this sense, it is not surprising that protests against the neglect of the reserve merged with protests against the failure of the government to meet other social responsibilities. The biological reserve wildfire was not the primary or even a salient cause of the current unrest. But its symbolic and cultural significance, contextualized with historical and current events, suggests it influenced Nicaragua’s trajectory in ways we have yet to fully comprehend.

Although the forest fires are out and an agreement to cease social security reforms has been reached, their embers ignited long-simmering dissatisfactions in Nicaragua. There is cause for concern based on Nicaragua’s very recent revolutionary struggles. Yet, despite the links that can be drawn between Indio-Maíz and the protests, or between land and revolution, Nicaraguan Monsignor Silvio José Báez remarked, “[this] is an armed state against an unarmed people...this is not a civil war” (Malkin and Robles 2018). His view openly challenges the administration’s public proclamations that external imperial powers are shaping the narratives shared with the world - a view buoyed by repeated, almost daily, accounts of state violence against the beneficiaries of its post-war policies. Urbanites continue to take to the streets, tearing down the trees of life, and sequestering themselves in churches. Campesinos are bracing for another revolution, collecting arms in preparation for a defense of the land and life they cultivate, as they more recently did with protests against the Interoceanic canal. Whether tearing out metal roots or defending organic ones, the historically ingrained causes of these conflicts are unlikely to dissipate anytime soon.

Rogers, T. 2018. The unraveling of Nicaragua: Amid the mass protests against the Ortega regime, the country is showing signs of democratic renewal. The Atlantic. 6 June 2018. Available at:https://www.theatlantic.com/international/archive/2018/06/nicaragua-ortega-protests/562094

Sinreich, L. and J. Cupples. 2014. Collaborating with a muddy road and an ailing forest: The construction of ecological citizenship in San Francisco Libre, Nicaragua. Journal of Latin American Geography 13(3): 63-85.

Thaler, K. M. and E. S. Mosinger. 2018. Nicaragua protests threaten an authoritarian regime that looked like it might never fall. The Conversation. 2 May 2018. Available at: https://theconversation.com/nicaragua-protests-threaten-an-authoritarian-regime-that-looked-like-it-might-never-fall-95776