Here, we discuss the process of creating the 20-minute video, “We Made Our Map: Territory, Participatory Cartography, and Wind Power in the West Coast of Ceará, Brazil,” which shows results of a participatory mapping project that helped a traditional community secure land rights when threatened by a wind farm. The participatory mapping process (2011–2015) included continual critical reflection regarding the community, its territory, its engagement with cartography, and the impacts of large infrastructure projects.

Community leaders requested a map from the Department of Geography, Universidade Federal do Ceará, in the course of seeking technical assistance to show traditional livelihoods in Xavier. The mapping project was to include sea, beach, dune (including interdunal lakes), river, and mangrove environments used for livelihoods (fishing, mollusks, and agriculture) and leisure. The specific motivation for resource mapping was the 2009 construction of a wind farm, licensed by Ceará state authorities without obtaining community consent. The wind farm has caused social tensions between the community and the wind farm owner, and within the community (Meireles et al. 2013; Gorayeb et al. 2016; Brannstrom et al. 2017).

Xavier community is a traditional settlement of twenty-two families (sixty-six residents) who rely on fishing with nonmotorized boats, collect shellfish and shrimp, and practice small-scale agriculture. Common property, rather than definitive land title, prevails. In 2005, Xavier residents noted the presence of outsiders taking measurements and installing equipment. Construction of the wind farm started in 2007, and in 2009 the wind farm began producing power from fifty turbines capable of generating 104.4 MW. This wind farm was Brazil’s largest until December 2016. Houses in Xavier were 200 meters away from the nearest turbine. After many complaints by Xavier residents, in 2013 the wind power firm donated R$540,000 (approximately US$130,000) to the Xavier community association for the construction of twenty-two brick houses, one per family, to mitigate the negative impacts of the wind farm. 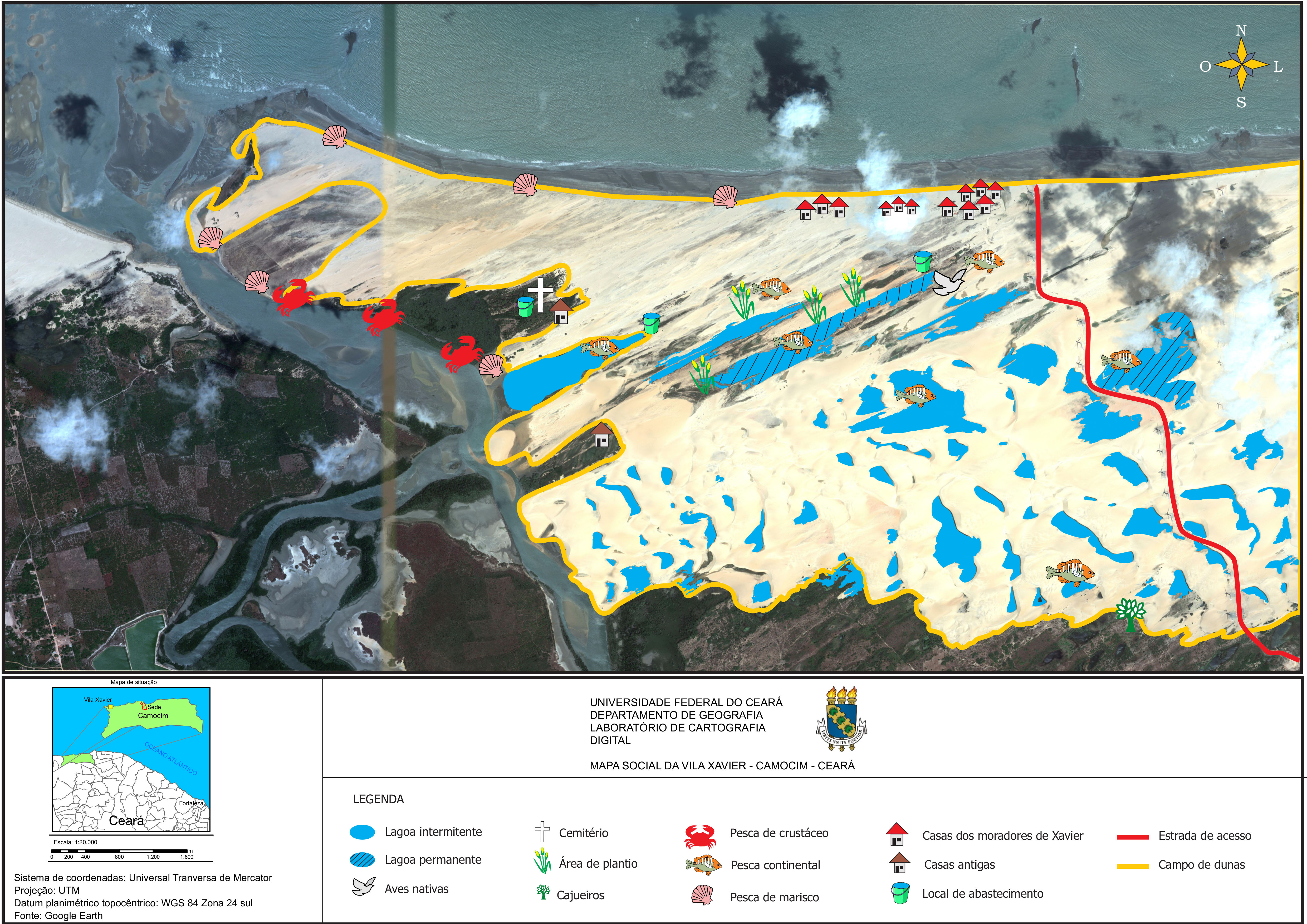 We aimed to facilitate participatory mapping by transferring technologies and knowledge to residents. The workshops resulted in thematic maps that showed conflicts over resources. During the workshops we also interviewed community leaders and participated in community activities, creating synergies between research and extension. In 2014, project leaders Gorayeb and Meireles decided to make a documentary film about the problems caused by the wind farm in the Xavier community, and on the stages of cartography applied to community resistance, resource access, and traditional livelihoods. We obtained video in several four-day periods over 12 months, during which the team (led by Gorayeb or Meireles) resided in the community. We also planned interviews with the protagonists shown in the documentary. For guidance, we relied on previous documentaries produced or advised by Acselrad and Almeida, who used videography uploaded to youtube to show a Brazilian audience the role of Brazilian public universities in supporting marginalized traditional peoples. Although we translated our documentary into English to reach a larger audience, our first audience was the Xavier community, which lacks Internet access.

For the “We Made Our Map” video, we relied on a videographer who filmed and took still photography of 2D and 3D participatory mapping, the community evaluation, and GPS renderings. We screened a preliminary version of the video in the community in May 2016.

Initially, the audience of about twenty-five people laughed when they saw their images on the screen, especially when their daily activities, such as walking on the dunes, harvesting vegetables, or working with their tools, were projected. Perhaps this was because of the novelty of seeing their daily work represented by outsiders on video. But then the audience was silent while their leaders were interviewed, and most of the audience—except community leaders—lost attention by the time professors talked about the negative aspects of individualism and the need for greater solidarity and partnerships in rural communities. Reduced apparent interest may have resulted from the type of language that the professors used and from the fact that the professors were at the end of the video.

At the end of the screening, the uncomfortable silence was broken by a community member who was upset that only a small number of residents appeared on screen, and referenced the claims of solidarity made by one professor. A rather chaotic discussion followed in which people shouted their claims, making it difficult to follow individual arguments. Possibly, this situation resulted from the fact that intracommunity conflict had increased because of the mitigation measures taken to compensate residents for the wind farm.

Our main challenges in producing the video included expenses and travel time to the community (which is about 400 kilometers from Fortaleza) for our team, which included a professional videographer who graciously donated his time to this project. A main lesson we learned is the need to have a better-defined plan that more clearly outlines the story we wish to tell. We did not have this plan established when the videographer started his work, which resulted in hundreds of hours of unused video. Another suggestion for future work is to include community members in planning the video. The fact that about half the residents are illiterate and the rest are functionally illiterate means videography is a way for community residents to tell their story in their own words. Including community members in a more participatory way would have increased the number of people who appeared in the video and offered more community members the opportunity to tell their own stories.

Livelihoods of traditional communities, in Brazil and elsewhere in Latin America, are threatened by large infrastructure projects relating to mining, energy, and transport. Visible and permanent means of communication, such as videography, coupled with participatory research or extension activities, may help to express and transmit their values, beliefs, and history to younger generations. These practices may add value to traditional livelihoods and offer additional tools to resist the power of large firms and their political allies, as Acselrad and Coli (2008) and Almeida etal. (2010) have demonstrated. More broadly, participatory cartography practiced in defense of threatened communities and resources may inform policies that respect principles of environmental and social justice, in addition to securing the territory and means of livelihood of marginalized or vulnerable traditional communities.

Meireles, A. J. A., Gorayeb, A., Silva, D. R. F., and Lima, G.S. 2013. Socio-environmental impacts of wind farms on the traditional communities of the western coast of Ceará, in the Brazilian northeast. Journal of Coastal Research 65:81-86.